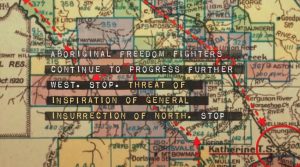 These three colloquia set out to bring together filmmakers, activists, and researchers to discuss the use of film and media technologies in the social movements of autochthonous populations. In the company of those involved in these communities and social movements, our aim is to map the film and media forms and practices employed within recent and ongoing autochthonous struggles. These exchanges will investigate the different situations and experiences that produce these filmic forms, their vernacular histories and roles within these political and social movements of resistance. The colloquia are organized under the auspices of the research project “For a Global Study of Filmic Practices within Autochthonous Struggles,” lead by Nicole Brenez at the French national film school La Fémis and funded by PSL Research University’s Global Studies initiative.

The research project and its central concerns

Collectively, we aim to create a space for the study and promotion of the role and forms of filmic and media practices, enlisted during times of adversity when the effects of global processes intersect with the lives of indigenous and rural communities.
These autochthonous communities – their identity and ways of life embedded in deep historical and cultural bonds to their lands – are often the first in line to bear witness, suffer and endure political disenfranchisement, state violence, economic exploitation, pollution and contamination of lands and living beings, environmental injustice, expropriation, and displacement. Behind these experiences and instances of plight are large-scale ecological, macroeconomic, and geopolitical processes, which take decades or centuries to play out, encompass continents, and whose origins are largely human. An environmental catastrophe, a negative economic development, or a series of hostile political decisions can lead to situations of intense distress and struggle where autochthonous communities need to mobilize in order to ensure their existence and protect their environment. During these times of conflict, they require tools to frame and render tangible the impacts of global processes. In creating and employing compelling figurative and representational forms, the communities can make their voices heard and raise awareness about their causes, allowing them to reach society at large, which bears a great share of responsibility in begetting and sustaining large-scale processes. Since the 1960s, many of these communities have made use of various media practices as a way to document and engage with the struggles they are involved in.
We are interested in studying how the act of image and sound making becomes a part of the dynamic of the struggle; what effect do the filmic and media practices have on the course of the struggle; how are the figurative and representational forms conceived and adapted to the particular situation; in what ways does the community participate in or influence the process of devising these forms; how are the works lent a historical depth, given a sense of the larger processes at work, while also conveying the urgency of the situation; how and where are the resulting works distributed and what is their effect both within the community and outside?

This first meeting will examine the filmic tactics developed by the autochthonous resistance movements in response to land spoliations and the extraction and transportation projects of the mining and petroleum industry. In their masterclasses, filmmaker Alanis Obomsawin of the Abenaki nation, activist and videographer Myron Dewey of the Newe-Numah and Paiute-Shoshone nations, and filmmaker Sky Hopinka of the Ho-Chunk and Pechanga nations, will reflect on the confrontations between autochthonous communities and armed forces in Oka, in 1990, and at Standing Rock, between 2015 and 2017. Both the Oka Crisis and the Dakota Access Pipeline protests at once lay bare the willingness of the government to forcefully deprive the autochthonous communities of their rights and demonstrate how employing filmic practices and media tactics allows the communities to represent themselves and their plight. The proposals for this section could focus on filmic practices developed during these ongoing struggles or on the diversity of filmic forms related to intertribal and pan-Amerindian political movements in North America.

These two days will be dedicated to the constitution of a first cartography and chronology of filmic practices that document the ongoing autochthonous struggles in the regions historically marked by the colonial influence and practices of the United States. Collective amnesia regarding the colonial history of the Philippines will be the starting point of this colloquium. Filmmaker and professor of visual and media arts at Emerson College, John Gianvito will discuss the films where he explores the political and visual history of American imperialism. Activist Myrla Baldonado, one of the founders of the NGO People’s Task Force for Bases Clean-Up (PTFBC) in the Philippines, will present the history of collective local and international mobilizations against the U.S. military bases Clark and Subic. The conversation will then be extended to all contemporary autochthonous struggles in the Pacific region and the West Indies: Okinawa, Micronesia, Philippines, Hawaii, Puerto Rico. We are inviting proposals that will take an empirical or historical (from 1980 to today) perspective on those issues. Special attention will be given to proposals dealing with social mobilizations against American bases, on filmic practices of contemporary environmental struggles in the Pacific or Caribbean regions, as well as on insurgent movements in the southern Philippines.

During this last meeting, we will reflect on the filmic, collective, and essayistic forms that represent the present-day experiences of autochthonous communities in contexts marked by the contamination of ancestral lands and the displacement of populations, and that also explore and employ alternative narratives, forms of history, and ideas of coexistence. Karrabing Film Collective will present its work borne of its community in Northern Australia, and filmmakers Lisa Rave and Erik Blinderman will talk about their investigation on Yucca Mountain, a Western Shoshone territory in Nevada, which has been the subject of a continuous colonization process since the Ruby Valley Treaty in 1863. As part of this discussion – extended to the autochthonous peoples of Oceania and North America – the proposals could consider filmic forms that document the intensive exploitation of natural resources and the threats it poses to both autochthonous and all of our futures. Presentations exploring filmic forms that incorporate the ideas of uchronia, utopia, and futurism will be appreciated.

Our wish is to include in our discussions all possible voices. Therefore, this call is open to both academics and non-academics alike, to those who either study the issues related to this research project or those who are involved in and touched by the experiences of struggle. We thus welcome contributions that follow a traditional 20-minute academic presentation but also proposals for experimental forms where the author(s) have a wide range of means to convey ideas and experiences.

Besides exploring the issues articulated above, or discussing the work of one of the invited filmmakers or collectives, the academic presentations may address one or several of the following themes:

– Histories of filmic practices. A study of the practices and/or legacies (archival or other) of an individual filmmaker or an activist collective.
– Empirical and ethnographic study of filmmaking, exhibition, and reception practices.
– Issues and forms of ‘visual sovereignty’ (Michelle Raheja). Ethics of shooting, decision making processes relative to what and when can or cannot be represented (e.g. ceremonial rituals, behind-the-scenes deliberations).
– Technical autonomy and technological sovereignty. Filmmaking and media production in situations marked by digital divide and in the conditions of surveillance and tracking across content and social media platforms.
– Financing and distribution of films. Government funding, aboriginal media and television stations, self-financing, and the impact of these forms of production on filmmaking and the autonomy of the filmmakers.
– Appropriation and adaptation of film and media technologies. Studies on past and “new ways to indigenizing film and technology through Indigenous Eyes” (Myron Dewey).
– The historicity of images and their ability to capture the evolving conditions of autochthonous struggles. The capacity of films at once to document the urgency (occurrences of state violence) and to construct in the long run the vernacular memories of autochthonous struggles.
– Sonic ecology of struggles. Oral histories, chants and protest songs in films.
– Uchronia, utopia, futurism. The futures and alternative realities – imagined, forgotten, or reinvented by the filmic practices of autochthonous struggles.

We invite proposals for experimental forms that can be constituted of media works (e.g. moving image, sound), involve a performance (e.g. monologue, dialogue, reenactment, dramatization). To encourage and facilitate the participation of those who are unable to travel to Paris, we also welcome proposals for performative forms that could be staged and directed from a distance following notes submitted by the author(s). For the latter, the author(s) would have at their disposal the bodies and voices of the organizers and participants of the colloquia and the entire space where the event takes place (depending on the day, a movie theater, a conference room).
The piece can last up to 20 minutes. The authors can use the language of their choice while the non-English works should be accompanied by an English translation. Thematically, the authors have complete freedom in their proposals as long as they touch upon the central concerns of this research project and follow the regional boundaries of one the three colloquia. For works to be directed from a distance, the organizers commit to discuss the directions/staging beforehand and, if necessary, organize a rehearsal. The performative forms could be filmed/recorded by the organizers following the authors’ instructions and within the technical means at our disposal. The unedited rushes will then be sent to the authors who can freely archive, edit, or distribute these materials.

The proposals for experimental forms should specify:

– the form of the piece (sound recording, video, dialogue…);
– the technical and/or human means necessary for the production of the piece (number of participants, props, technical requirements for the presentation of sound and moving images…);
– a 300-word summary of the performance/stage piece;
– if applicable, indications as to the recording and possible uses of the materials.
The authors should be aware of the aforementioned constraints, the specificity of the resources at their disposal, adapt their works to them accordingly, and keep in mind the importance of notations and instructions to be included with their final work if it is to be directed from a distance. In order to ensure that the work be presented in the best possible conditions the final work should be received by the organizers at the latest three weeks before the event.

Please submit your proposal before December 1, 2018, to: alopai@hotmail.com and larcherj@hotmail.fr. The proposals should specify the chosen colloquium, the presentation’s format (performance / video / academic presentation, etc.), include a summary of the academic presentation (500 words) or the experimental form (300 words), a short biographical note, and, if applicable, the human and/or technical means necessary for the production/presentation of the work. The participants will be notified of acceptance by December 17, 2018, and the final program will be published on January 20, 2019. We are unfortunately unable to provide financial aid, the participants will assume transportation and accommodation expenses. For any questions regarding the presentations please write to the email addresses above.